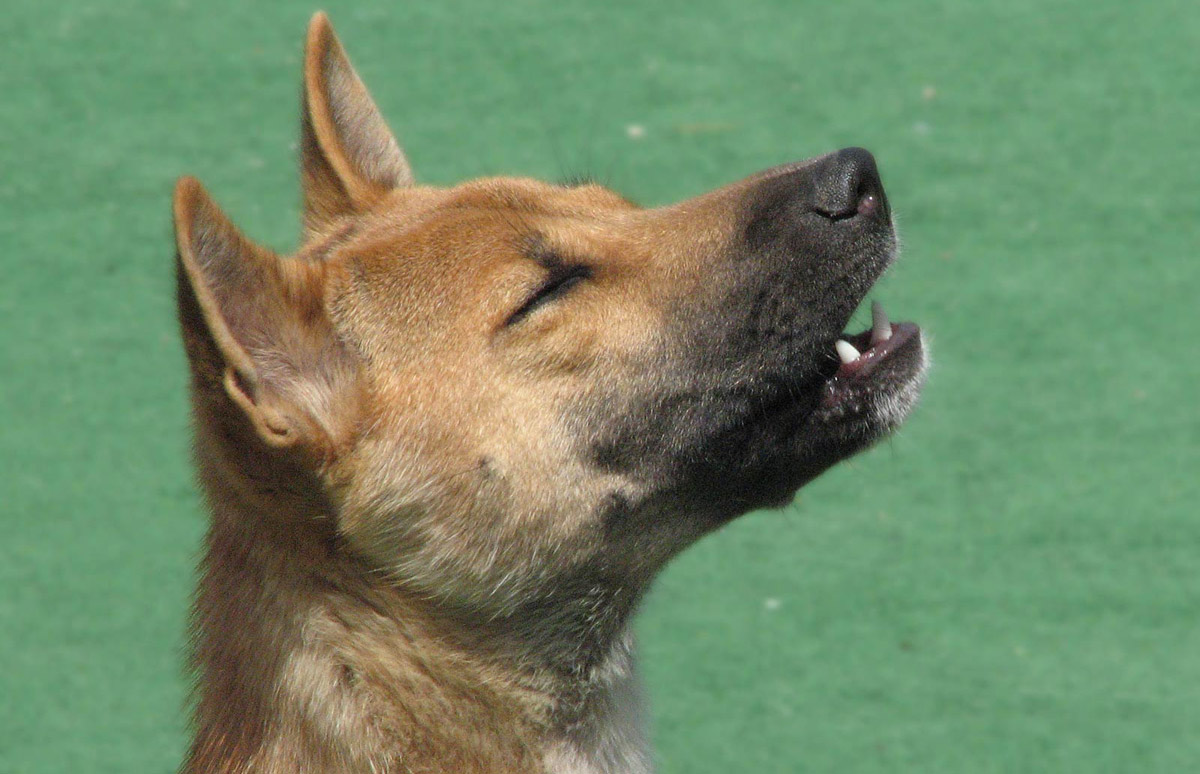 Today, Collection of Canines is highlighting a very unique and extremely rare breed, the New Guinea Singing Dog. This breed is not for everyone, as it is still found in the wilds of New Guinea. This dog is considered the rarest of all breeds and in fact, is on the verge of extinction. We feel that dog lovers near and far would benefit by getting to know the very rare New Guinea Singing Dog.

History
The New Guinea Singing Dog (aka Singer) has inhabited the island of New Guinea since the Stone Ages, remaining isolated from the rest of the world for thousands of years. The native people of New Guinea however have enjoyed the love and devotion provided by their intelligent companions.

These beautifully wild dogs were first introduced to non-natives in 1954 when Mr. Ellis Troughton, a curator from the Australian Museum, visited New Guinea and began collecting native mammals of the island including a pair of Singers which he took back to Australia for further study. Soon the pair escaped captivity on the search for their favorite delicacy – poultry. They quickly became a problem for the chicken population and an embarrassment to the government who had sanctioned the museum’s project. In the end, the duo was handed off to local natives who knew how to handle this special breed.

In 1956, another pair of Singers was again captured in New Guinea and sent to Sir Edward Hallstrom, who was studying native animals. In 1957, when Hallstrom was finished observing these dogs he sent them to live in the Taronga Park Zoo in Sydney, Australia. There, Mr. Troughton, the original New Guinea researcher in 1954 and now curator of the zoo, determined the Singers were a separate species and labeled them “Canis hallstromi.”

At the zoo the pair had their first litter and soon the offspring were being sent to other zoos across the country. The San Diego Zoo became the first United States owner of a New Guinea Singing Dog in 1958. The female was later bred with a male that had also been sent from Sydney and by the early 1960’s the offspring found their way to other U.S. and Canadian zoos.

An important though disappointing historical note of this breed occurred just 17 short years ago in 1993 when the USDA declared the Dingo and the New Guinea Singing Dog as domestic breeds and reclassified both as Canis Lupus Familiaris. This change was significant. Zoos had to now follow a completely different set of rules to own and handle these dogs, which took much more time and money than traditional zoo animals. As such, Dingos and Singers became too expensive for zoos to keep and most dispersed these dogs to the public. This was disastrous, as now there was no official registry to chronicle the pedigrees and the future breeding that was inevitable.
Then Dr. I. Lehr Brisbin, Jr. and Don Ehrlich from Kansas stepped in and took the foundation stock from their local zoo. They immediately began documenting the lineage, having been granted access to zoo records. By 1996, Dr Brisbin persuaded the UKC to start a registry for the New Guinea Singing Dogs. Unfortunately, Singers are still not recognized by the American Kennel Club.

Today, there are less than 50 documented pedigree New Guinea Singing Dogs, though it is thought that anywhere from 100 to 200 of them remain in captivity without verifiable pedigrees. No one really knows how many Singers are still living in the wilds of New Guinea but the numbers are decreasing due to interbreeding and habitat destruction which is threatening the lives and future of this exotic breed.

Thanks to the efforts of the New Guinea Singing Dog Conservation Society, attempts are being made to preserve the heritage of the New Guinea Singing Dog and the research continues. Conservation society members believe singers are a unique species, different from wolves, dingos and domestic dogs, and they hope to convince others so that the Singer may be declared an endangered species and therefore afforded the protections within.

General Appearance
The New Guinea Singing Dog is a muscular, small-to-medium-sized dog with a fox-like appearance. Its triangular-shaped head sports small erect ears and obliquely-set triangular eyes that portray a mysterious quality. It also has a short and thick double coat and brushy tail. Further demonstrating its wild origins, the Singer has an unusually large upper first molar commonly found in wild canids such as wolves.

The most unique feature of this breed is defined by its name – Singing Dog. With a unique ability to vary the pitch of its howl and blend tones this dog sounds as if it’s actually singing. The dog can be spurred to sing if disturbed or excited and has a complex vocabulary of yelps, whines, and single-note howls.

Height from the withers (ridge between shoulder blades): 13-18″
Average Weight: 17-30 lbs
Coat Color: Coat color varies from shades of red and dark brown to lighter shades of sable and fawn. It can also be found in black and tan varieties.
Grooming Needs: The all weather coat is self-sufficient and will take care of itself though light brushing is recommended.

Temperament
This hardy and inquisitive dog is first and foremost WILD and is not for everyone. It has never been fully studied in its natural habitat; therefore not much is known about the New Guinea Singing Dog’s behavior or social organization when roaming free.

We do know, however, that the extremely graceful and lively, but slightly aloof, New Guinea Singing Dogs make wonderful companions which exude affection and a gentle nature when properly socialized.

It must always be remembered though that this dog retains its strong wild hunting instincts and is very predatory. To own a New Guinea Singing Dog is to understand that you own a primitive and wild breed. The best owners of Singing Dogs admire and respect their dogs’ natural independence and self-sufficient personality.
This dog has been compared to owning a Basenji, Dingo, or Shiba Inu though Singers appear to have a bit more “wild” in them. This can be seen by observing their strong instinct to hunt prey, even scaling a full-sized tree to catch the hunted. The constant need to explore everything in their environment uses all five senses including taste, chewing therefore may be a problem.

Good with children? As this dog prefers a sense of calm; well-mannered, quiet children are most accepted by this breed. This dog is not aggressive towards humans so the likely response to a loud, rambunctious child is to retreat and observe from a safe distance.
Good with other dogs? This dog can be dog-aggressive toward strange dogs, especially of their own sex. Though small this dog is a fierce fighter.
Good with cats? Singers are a predator who consider small animals, such as cats, prey. This dog will learn to respect the family cat IF it is introduced as a puppy. The reverse, introducing a kitten to your adult dog, is not a good idea. Neighboring cats are considered fair hunting game.
Good watch dog? Unknown
Easy to train? It can be challenging to train a Singer because it is not very interested in entertaining you with such trivial games as retrieving a ball. Trying to get your Singer into a regimented training program will likely be met with disappointment, however with extreme perseverance and a gentle touch, this dog can be trained.
Can be left alone? Singers are willing to travel great distances to satisfy the prey instinct and can be difficult to keep contained in a yard or shelter due to its physical agility and devious intelligence. Singers are known as escape artists and prefer their freedom. Fenced yards are not enough. Enclosures should have toppers and footings to contain these determined diggers.
Activity level? This dog needs a lot of exercise, including daily brisk walks or jogs.

Where to look for a New Guinea Singing Dog –